Posted on 25 October 2010 by planetcoops 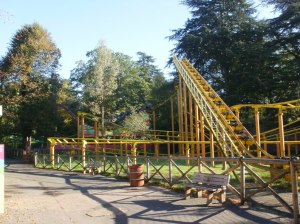 Today we visited the West Midlands Safari Park. We went there earlier in the year and had a free return visit which had to be used by the 5th November. I remember we did the same thing three years ago, and were there with an eight day old baby. This time Mr 3 got to go on some rides, although he wasn’t very keen. Last time we were there he was so excited to go on the rides. He was enthusiastic and full of laughter. This time he seemed scared of everything. I think it might be because last time he bumped his head on a ride and that event has had a chance to get imprinted on his brain.

When we lived in Basingstoke we used to periodically go to Paulton’s Park. It was fantastic for younger children. By the time we left our yougest child was four and we had got used to the fact she could go on almost every ride. Even the ride she couldn’t go on had a little version next to it. When we moved here and first went to the Safari Park we were surprised at the height restrictions on all the rides and disappointed that the children who had got used to going on everything suddenly were not allowed on very similar rides. Miss 7 is only just now at the stage when she can go on most rides. In fact, she is at that wonderful point – 1.2 m tall – which means she is allowed on most of the big rides (1.2m and over) and still allowed on all the little rides (1.2m max).

Cubs Kingdom is the area of the park which is aimed at the younger customer. This is where Mr 3 banged his head. The little rocking boat ride, supposedly safe for toddlers, moves with such a jerk that he banged his head on the safety bar each time it moved. Now he’s scared of little cars that go round in a very sedate circle. It seems that in some things they are overly health and safely conscious, but in other (perhaps more important) ways they aren’t careful enough.

We were very impressed with the halloween decorations. Someone had gone to a lot of trouble planning all the extra displays.

All the staff were dressed in costume and gruesomely face painted. They must have bought hundreds of pumpkins, and there were gravestones scattered about.

Another thing which also really impressed me this year were the toilets. I know, but it’s important to me. The toilet blocks had been getting very run down, to the extent that I would hang on for the journey home rather than use them. Over last winter they were refurbished and are now quite pleasant. Lovely tiled floors, all repainted, and the sinks a very elegant looking slab of faux-granite. I was going to take a photo, but I never got a chance in there on my own, and didn’t want to be considered a wierdo, taking photos of a sink on my family day out! 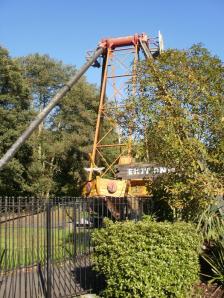 One thing which wasn’t so great was the fact that a lot of the rides couldn’t cope with the frost. Half of them weren’t open by the time we got to them, and we had lunch a wee bit early (midday is early for us) so that more would get a chance to get going by the time we were finished. The pirate ship, which is one of our favourites, never seemed to get going. At least it did sometimes when other people were on it, but every time we got near it ground to a halt.

We also had a bit of an unpleasant time in the reptile house. We had gone in, enjoying the fact that it was almost empty, when a couple of the keepers went into the crocodile enclosure (I have no idea why – they went in, said hello to the crocodiles and came out again). Fantastic, you might think, That’s more interesting to watch than a croc pretending to be asleep. Unfortunately that’s what about a hundred other people thought and we were stuck up against the glass, trying to keep an eye on all three kids in a corridor so full no-one could move. If this had been when I lived in London it wouldn’t have been a problem – just like a normal trip on the tube. We are now Herefordians, and used to a bit more space!

The size of the ice creams, however, was to everyone’s approval.

Living a busy family life in a beautiful place with a hundred and one things to be achieved.
View all posts by planetcoops →
This entry was posted in Family and tagged Kids, Safari Park. Bookmark the permalink.